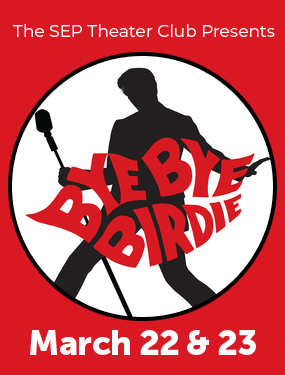 The St. Edmund Prep Theater Club is gearing up for their spring production of “Bye Bye Birdie” (music by Charles Strouse and lyrics by Lee Adams, and book by Michael Stewart) on March 22nd and March 23rd.
When the draft selects rock star Conrad Birdie (senior Brian Jean), his fans are devastated, but none more than struggling songwriter Albert Peterson (Michael Leahy '21), whose song Birdie was just about to record. Albert's longtime girlfriend, Rosie (Madison Ross '19), pushes Albert to write a new tune that Birdie will perform on television to a fan selected in a contest. The scheme works, with young Ohio teenager Kim McAfee (Brenna Gannon '20) declared the winner, but no one has counted on the jealous wrath of her boyfriend, Hugo (Edwin Castillo '21). The hilarious and upbeat musical also features AbbyGail Valcourt '19, with a hilarious portrayal of Albert Peterson’s long-suffering mother, as well as Emily Caccamo '21, Joseph Sinatra '21, Jenna Lynn Langaman '21 and Julianna Taliercio '21 as Kim McAfee’s family and friends.
Performances will be Friday March 22 at 7:00pm and Saturday March 23 at 3:00pm. Tickets are $8 ($5 for students if purchased in advance), and will be sold during school lunches outside the cafeteria beginning on Monday, March 18. We hope you will join us for a rocking good time!
If you have any questions, feel free to contact Ms. Peggy McEvoy or Mr. Scott O’Donnell '06.
Published March 5, 2019 Print