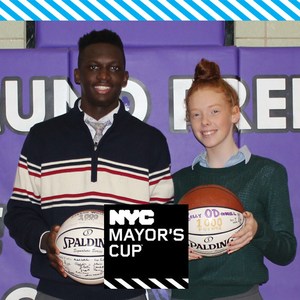 Congratulations to senior basketball players Jordan Williams '17 and Kelly O'Donnell '17, who have been selected to represent St. Edmund Prep on the CHSAA teams competing in the 2017 Mayor's Cup Game.
Fresh off a season which saw each of these outstanding players score their 1,000th career point and lead their respective teams into the playoffs, Williams and O'Donnell become the third and fourth Eagles to be selected to the Mayor's Cup Basketball Squads.  Altine King '14 and Alexandra Jacques '15 previously earned the honor.